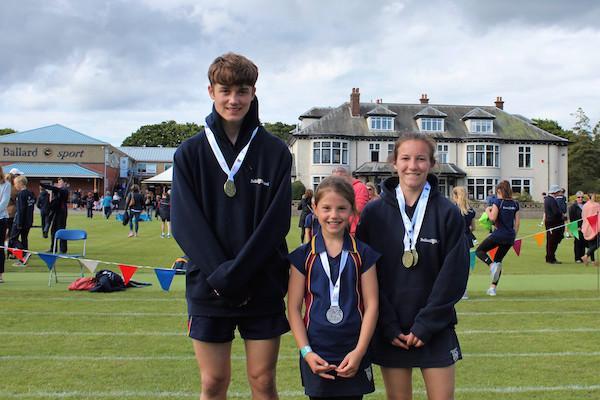 Ballard School’s top sportsmen and women achieved great success at the ISA London West Athletics on Wednesday, 5th June, winning 23 medals, 4 championship regional records and upholding their gold position in the U17 Girls’ Relay for a 4th consecutive year. This run of achievements saw three pupils go on to compete in the National Championships, held at the Alexander Stadium, Birmingham on Wednesday, 19 June 2019.

At ISA London West Athletics, Lana Blake single-handedly beat two championship regional records in Long Jump with a distance of 5.38m and in the 200m with a time of 25.57s. Theo Shaw and Ella Adams also saw their 1st place wins smash records; Theo with a distance of 38.22m in the Javelin and Ella with an impressive time of 12.81s in the 100m.

Lana Blake took the decision not to compete as she is currently focusing on competing in the English School Nationals, where she is hoping to break more records.

Andrew McCleave, Headmaster at Ballard School, said: “I am very proud of all our pupils who participated in the ISA London West Athletics and National Athletics; their achievements were outstanding across the board.”

Finlay Wood, PE teacher at Ballard School, said: “The pupils worked so hard in the run-up to these competitions and really deserve their fantastic achievements. A special well done to them all.”

An award-winning, independent, co-educational day school for children aged 2-16, Ballard School sits within 32-acres of woodland and playing fields on the Hampshire and Dorset border, between the New Forest and Solent.

Ballard School has outstanding sports facilities, including an Olympic Astro and provides a healthy, positive and inclusive sports provision. The school has six full-time specialist PE staff for individual sports tuition, who teach all pupils from Nursery upwards.

As well as winning a wide range of team competitions, the school also supports pupils in their success out of school across a wide range of sports and has strong links with local sports clubs, providing further opportunity and encouragement for those pupils who wish to develop into county, national and, potentially, international players.

Ballard’s approach is that sport and its benefits are for life and for all abilities, summarising sporting values with the acronym TREDS – teamwork, respect, enjoyment, discipline and sportsmanship.